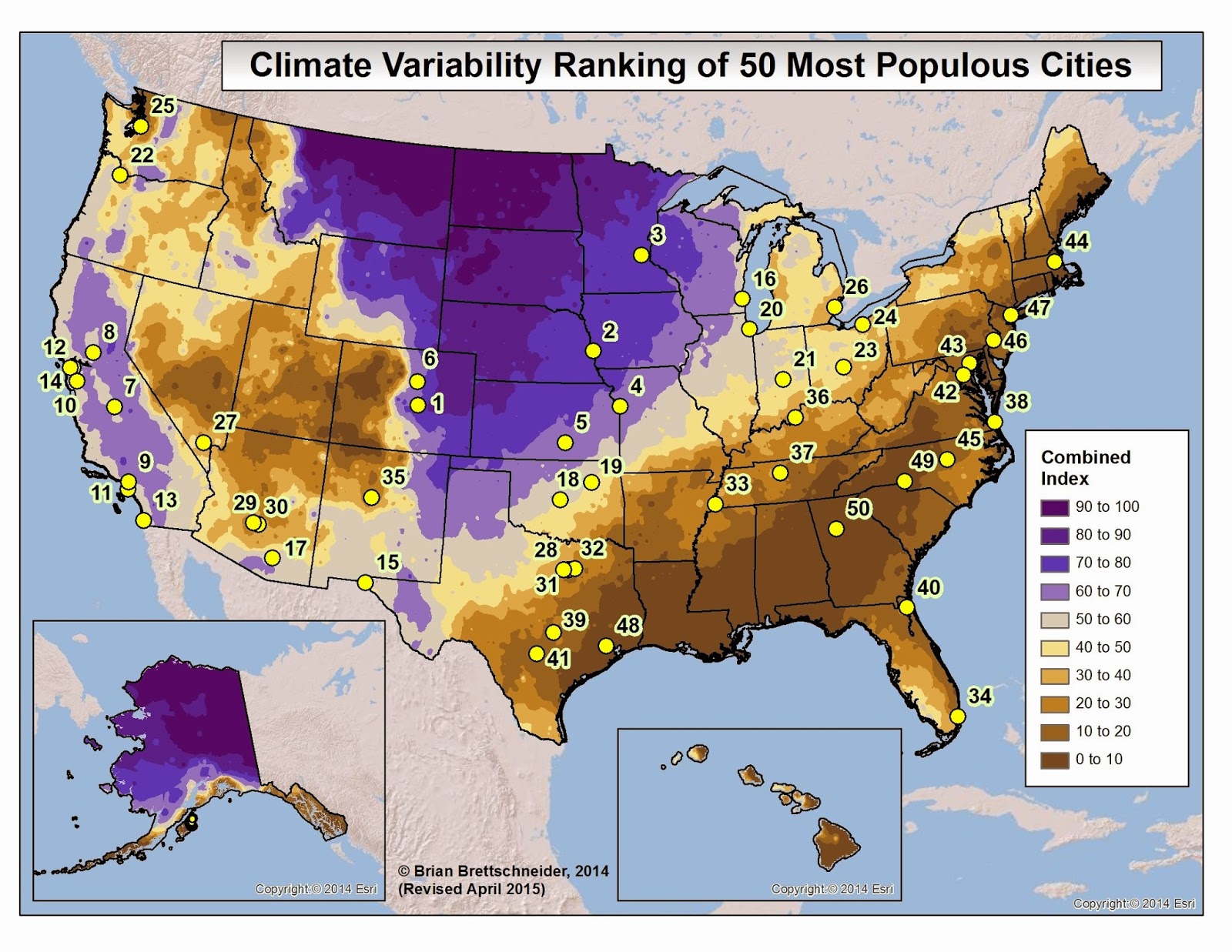 If you don't like the weather in New England, just wait a few minutes – Mark Twain

What parts of the U.S. have the most temperature and precipitation variability? This question is actually not so difficult to answer. What is more difficult is the definition of variability. Many maps exist displaying temperature ranges and annual precipitation – but very little has been done to assess overall intra-annual climate variability. This post attempts to remedy the situation.

The National Climate Data Center (NCDC) publishes temperature and precipitation values for nearly 10,000 stations across the country. Figure 1 shows the location of those stations. (April 17th note: the NCDC is now the NCEI - National Centers for Environmental Information). These data are the basis for my climate variability analysis. 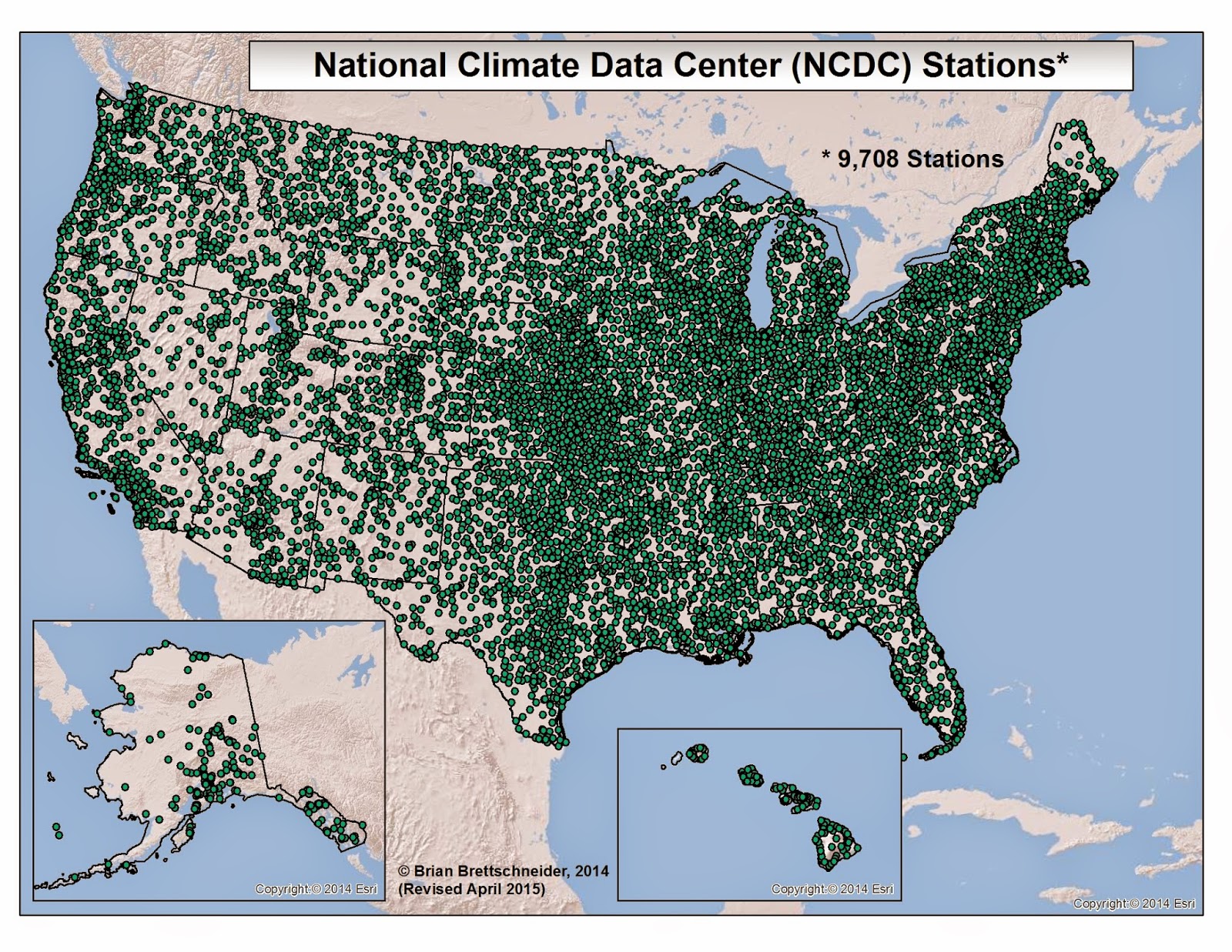 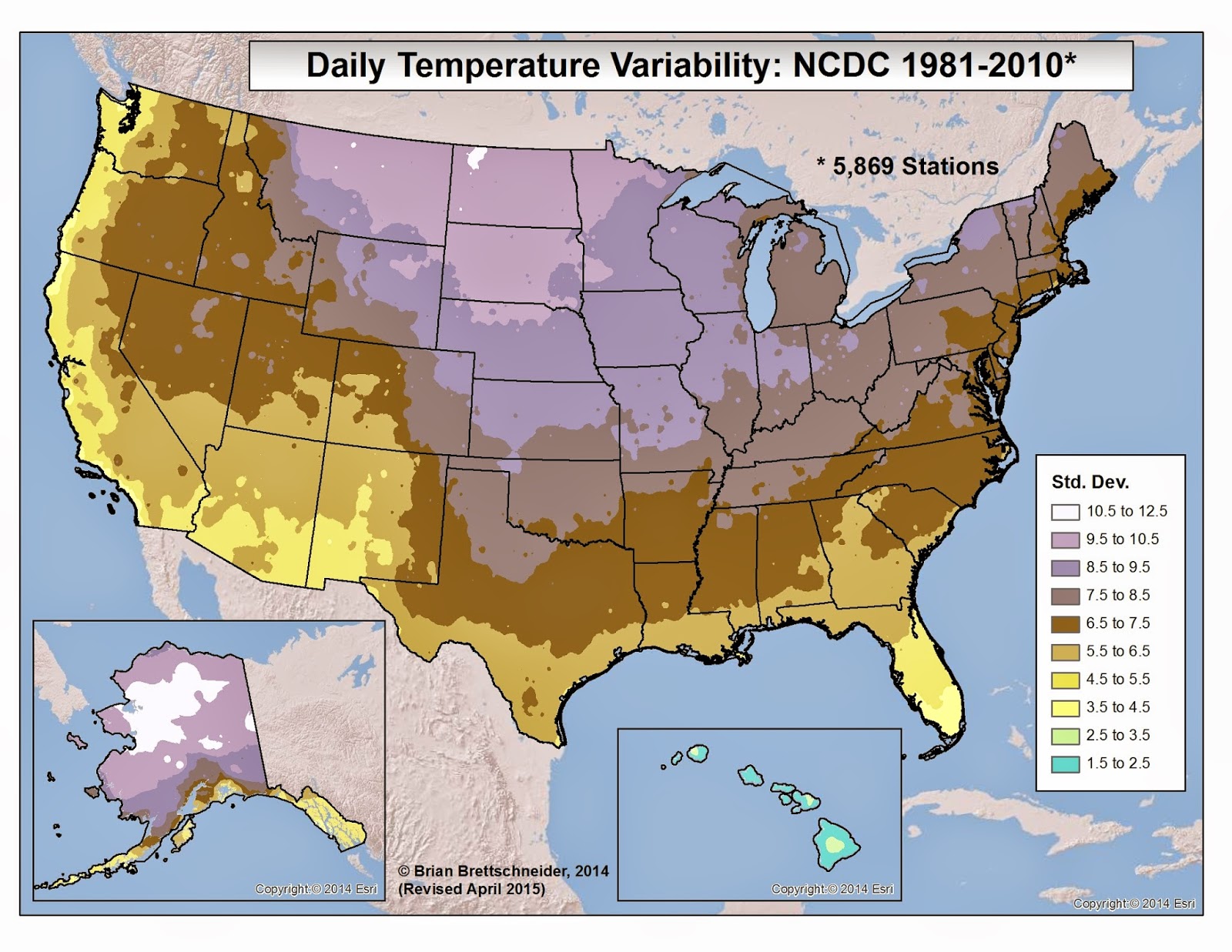 A much better method is to look at monthly precipitation values and see how much they change over the course of the year. In many cases there are substantial difference between wet and dry months. Some stations in California and Alaska receive 60% of their annual precipitation in a three-month window. On the flip-side, many stations in the Northeast and mid-Atlantic have precipitation evenly distributed across all months.

Figure 3 shows the month-to-month variability in precipitation values across the year. To make this map we calculated the difference between the NCDC normal precipitation for each month and compared it to the value that would occur if each month received 1/12th of the annual precipitation. For example, image two stations that each average 24" of precipitation per year. One station averages 2" for each of the 12 months. The other station receives 80% of their annual precipitation between May and August. In this hypothetical, the first station has very low monthly precipitation variability while the second station has very large precipitation variability. This type of assessment is called a goodness-of-fit test against a uniform distribution. In this case we used the chi square goodness-of-fit-test. The values produced by this test are unitless and are evaluated against a table of significance values. To avoid confusion, the values are left off the map and substituted with "high" to "low" labels. 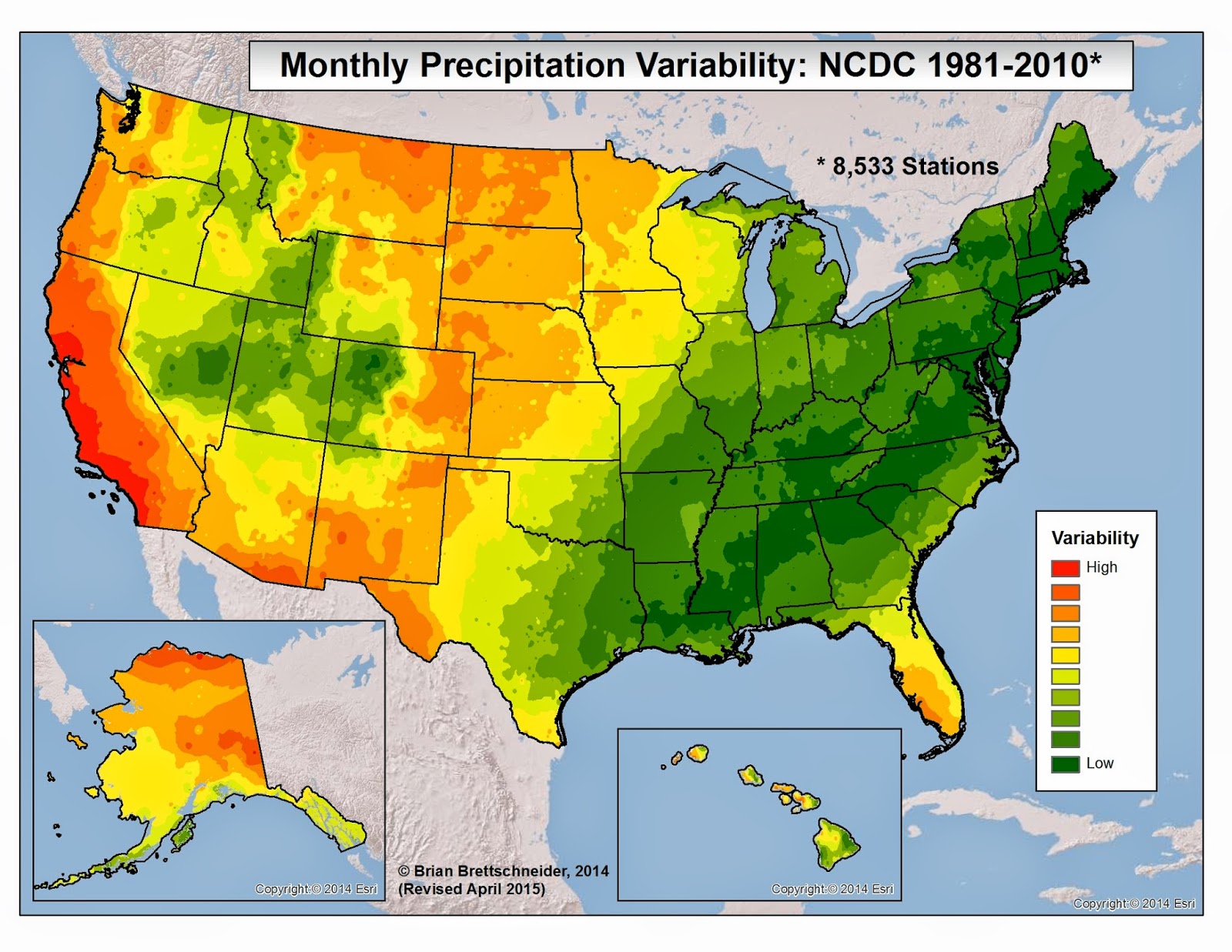 I had assumed that all cold regions would have low winter precipitation values due to the moisture capacity of the air being greatly reduced. However, that is only the case in the Northern Great Plains and Alaska – not in New England. The other quite surprising finding is the low month-to-month variability in the Great Basin. Perhaps this is an artifact of multiple synoptic-scale parameters in other regions that all converge here. 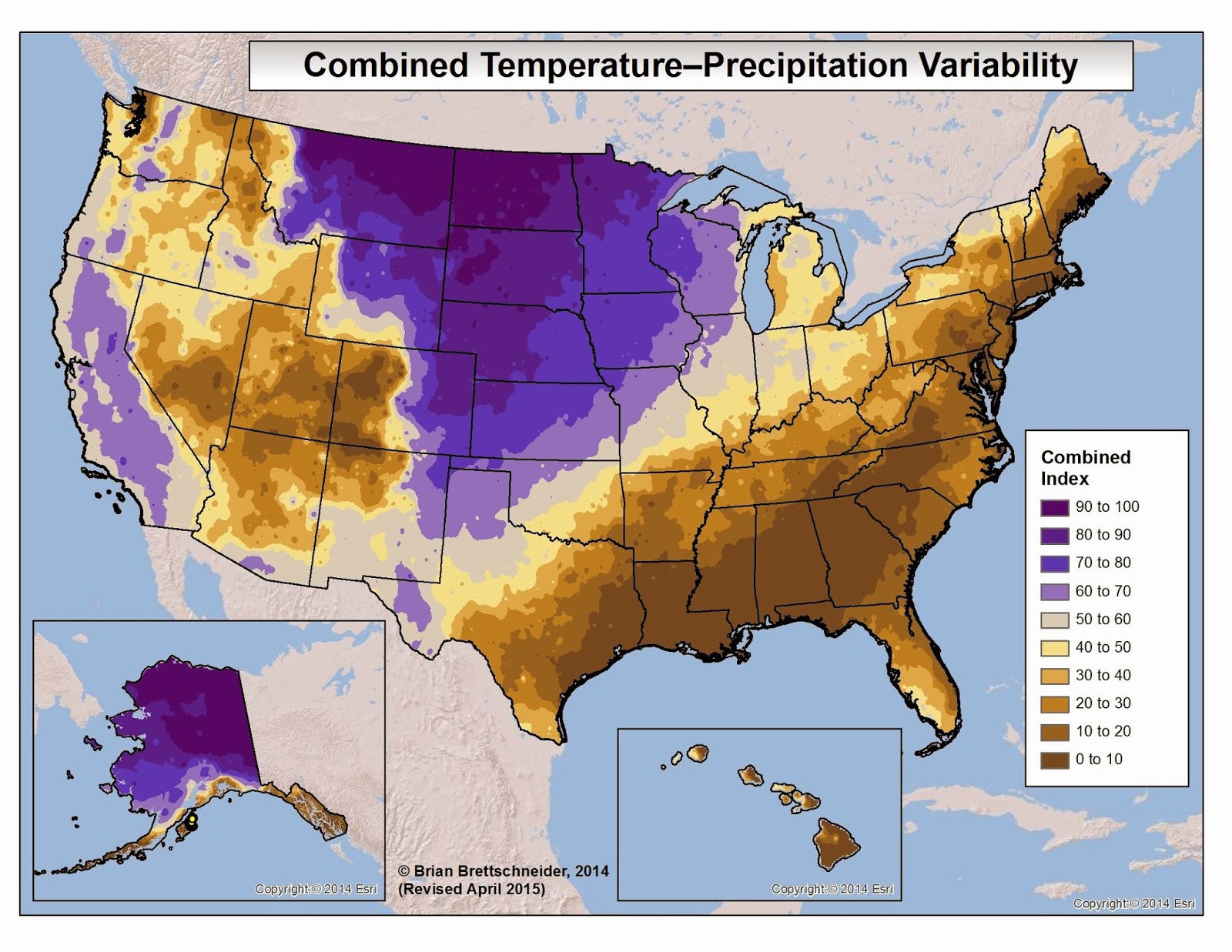 Figure 4. Precipitation-climatology combined variability score. Values are scaled up to 100.

The station with the highest annual climate variability is the U.S. is Prudhoe Bay, Alaska. Their value is 100. Prudhoe Bay is along the North Slope of Alaska at the shore of the Arctic Ocean. In the Contiguous U.S., Cut Bank, Montana, has the highest climate variability. The station with the lowest value is East Harwich, Massachusettes, on Cape Cod. Their combined value was 0.002.

Variability of 50 Most Populous Cities

Earlier we noted which stations had the greatest and lowest values. However, the stations at the top and bottom of the list have very small populations. If we look at just "big" cities – the 50 most populous cities in the U.S. according to the 2010 Census – we get a better idea about how places compare to one another. Figure 5 shows the location of the 50 most populous cities and a ranking, from 1 to 50, identifying which cities have the greatest inter-annual climate variability. The names of the cities and the values are shown in Table 1.

Colorado Springs, CO, barely edges out Omaha, NE, on the list for the top spot. Both cities have a variability score (percentile) between 74 and 75 (note: if the list were expanded to include the top 100 cities, Lincoln, NE, would be at the top of he list). At the bottom of the list is Atlanta, Georgia. Atlanta has a very low average daily temperature variability and a nearly perfect distribution of precipitation throughout the year.

On the flip side, how does New England score so low? The have the same issue as California but in reverse. Their temperature variability is in the moderate range but they have nearly uniform precipitation throughout the course of the year. A number of stations have less than a 5% difference between their wettest month and their driest month.

Figure 5. Precipitation-climatology combined variability score. Values are scaled up to 100. The 50 most populated cities (2010 Census) are overlaid and their relative rankings is shown.

Table 1. Ranking of variability score for 50 most populated cities (2010 Census).

Last December 4th, a post at fivethirtyeight.com identified the cities with the "most unpredictable weather" in the U.S. Ironically, two days earlier (12/2/2014) is when this analysis was published. There is a large difference between predictability and variability. In terms of predictability, their temperature index is fairly close to mine. However, for precipitation, predictability is related to the frequency of rainfall, while variability looks at the distribution throughout the year. Predictability is therefore closely related to precipitation amount and is therefore biased toward dry areas. In general, the fivethirtyeight.com index is essentially the same as a persistence forecast.
Posted by Climatologist49 at 1:33 PM